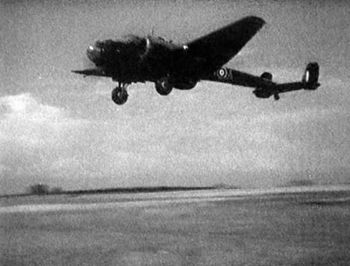 The Handley Page Hampden was the type 52 among the manufacturer inventory. This British twin-engine medium bomber was designed from 1932 to achieve its maiden flight in 1936. Introduction occured in 1938, production line ceased in 1941 and service duty stopped in 1943. Despite a step in modernity, it was unsuited to modern warfare unlike the versatile Vickers Wellington issued from the same Air Ministry specification. This category could group the potential feature of the Hampden derivatives : the HP.53 prototype (for a Swedish request which vanished without order); the two HP.62 prototypes powered by Wright Cyclone engine (instead the common Bristol Pegasus XVIII nine-cylinder radial engines); and the 150 Hereford (Dagger-engined Hampdens) of which most were re-engined with the Pegasus.

This page lists all films that feature a variation of the Handley Page HP.52 .