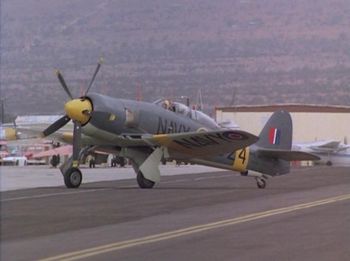 The Hawker Sea Fury was a British fighter aircraft developed for the Royal Navy by Hawker during the Second World War. It was an evolutionary successor to the successful Hawker Typhoon and Tempest fighters and fighter-bombers of World War II. The last propeller-driven fighter to serve with the Royal Navy, it was also one of the fastest production single piston-engined aircraft ever built. Exported to a number of countries, it acquitted itself well in the Korean War even against the MiG-15 jet aircraft. A total of 864 aircraft have been built.

This page lists all films that feature the Hawker Sea Fury .