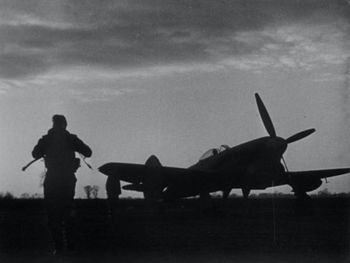 Hawker Tempest Mk V seen in A Diary for Timothy.

The Hawker Tempest was a British fighter aircraft primarily used by the Royal Air Force (RAF) in the Second World War. Its predecessor the Hawker Typhoon faced compressibility problems and intense flutter at high speed. The Tempest has a new low drag laminar flow wing. Its shape changed too to accomodate four 20 mm cannons. The airframe accomodated two engines, the Napier Sabre IIA series engine with the chin radiator (on the 801 Tempest V built and 142 F Mk VI which were powered by the Sabre V), while the rest were 452 Tempest F Mk II with the a Bristol Centaurus radial piston engine.

Including the prototypes, a grand total of 1 702 Tempest were built.

This page lists all films that feature the Hawker Tempest.