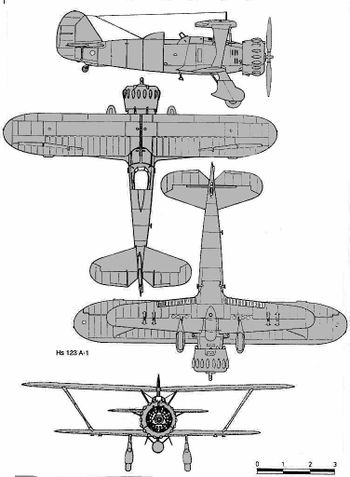 The Henschel Hs 123 was a German biplane aircraft whom the maiden flight occured on April 1935. Powered by a 880 hp BMW 9-cylinder radial engine, the type was build as a first generation of dive bomber (before the Junkers Ju 87 actually on first stage of design). The rough aircraft proved very valuable and on the Eastern Front less sensitive to mud and harsh operation than other type. Despite the Junkers Ju 87 operational service started in 1937, the Henschel Hs 123 fought alongside its successor until 1944. 12 aircraft have been sold to (China) Nationalist Air Force and used against Japan with some success in 1938. The Ejército del Aire (Spanish Air Force) was the other customer; its aircraft were the last to be hold from active duty in 1953.