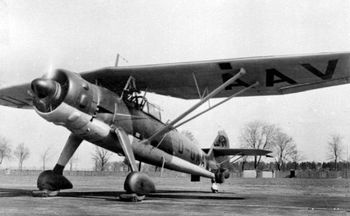 The Henschel Hs 126 was a German army cooperation/reconnaissance aircraft of the second half of the 1930s, radial-engined and with a parasol wing. Late in the war, it was used in glider tug and night ground attack roles, but production of the Hs 126 ended in 1941 and the type was retired from the front line in 1942.