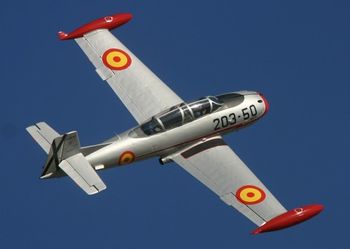 The Hispano Aviación HA-200 Saeta was the first indigenous jet designed in Spain with the help of Willy Messerschmitt. After producing the the HA-1109 (Spanish licence built version of the Messerschmitt Bf-109G) and the derivative HA-1112 (HA-1109 re-engined with Rolls-Royce Merlin), the design bureau and factory worked on a two-seater tandem trainer, the HA-100. After a successfull maiden flight in December 1954, the team replaced the radial powerplant for two licensed-built Turbomeca Marboré turbojet engines and refined some parts (tail, greenhouse, adding wingtip tanks, etc). So the first flight of this new HA-200 Saeta (arrow) was on 12 August 1955. Tests and tooling need seven years before the jet trainer reach the Ejército del Aire (Spanish Air Force) units with the service designation E.14. The type was retired only in 1981 in favor of the CASA C-101.
In the intermath, several variant left the production line including a major development designed to perform ground attack missions. This ground attack-orientated single_seat (an additional tank takes place of the rear seat; four underwing carry points) named HA-220 entered into service with the Spanish Air Force, which designated the type as C.10.
Another important step was the Egyptian contract, the first export for a Spanish aircraft. During 1959, an arrangement was reached that led to the HA-200 being produced under license in Egypt at the Helwan Air Works. After 10 airframes delivered by Hispano Aviación, Egypt built 90 Helwan HA-200B Al-Kahira in a decade.


This page lists all films that feature a variation of the Hispano Aviación HA-200 / HA-220 and the Egyptian licenced-built airframes.