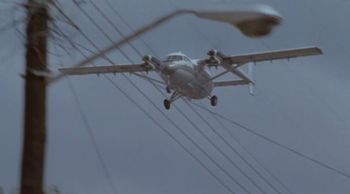 The Israeli Aircraft Industries Arava is a light STOL utility transport aircraft built in Israel in the late 1960s. The Arava was IAI's first major aircraft design to enter production. It was intended both for the military and civil market, but the aircraft was only built in relatively small numbers. The customers were found mainly in third world countries, especially in Central and South America as well as Swaziland and Thailand. 103 aircraft built.

This page lists all films that feature the IAI Arava.