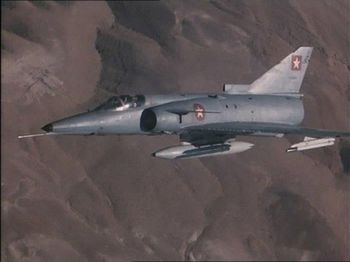 The IAI (Israel Aerospace Industries) Kfir (Lion Cub) was an Israeli made combat aircraft based upon the airframe of the Dassault Mirage V and powered by a J79 turbojet engine. Following substantial aircraft losses in the six day war, the Israeli Air Force needed new aircraft and the Mirage V fitted the bill. However, an arms embargo imposed by the French government prevented them from sourcing any. As an alternative Mossad sourced a vast number of data and designs for the Mirage III which enabled them to build their own variation. There has never been an official explanation of how they were able to find this information. The Kfir was in service with the Israeli Air Force from 1976 until 1996 and was also in service with foreign forces including Colombia, Ecuador and even the United States.

This page lists all films that feature a variation of the IAI Kfir.