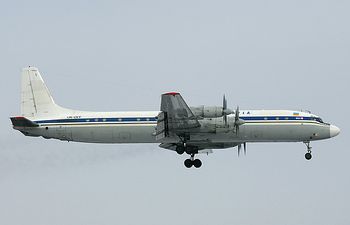 The Ilyushin Il-18 is a four-engined turboprop airliner. It was one of the most popular civil airliners of the soviet era with many still in use. It was first introduced in 1959 and was produced until 1978. A military variant was also developed, the Il-38, as a maritime patrol and anti-submarine warfare aircraft.

This page lists all films that feature a variation of the Ilyushin Il-18.