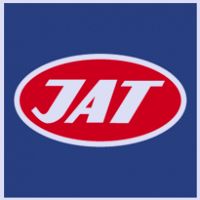 JAT Yugoslav Airlines was launched on 1 April 1947, and formally replaced Aeroput in 1948. The name was changed to JAT - Jugoslovenski Aerotransport (Yugoslavian Air Transport), then to JAT Yugoslav Airlines in the early 60’s. JAT started operations with three Douglas C-47 Skytrain and three Junkers Ju 52/3m converted to carry passengers. In 1954, Convair 340 and Convair 440 Metropolitan aircraft were purchased for short-haul and medium-haul routes, after which the Douglas C-47 Skytrain was used only on domestic routes. In 1957, six Ilyushin Il-14M aircraft were purchased. JAT purchased several Douglas DC-6B for long-haul routes in 1959. The 1960’s and 70’s saw the arrival of jet airplanes: Caravelle SE 210 Caravelle, McDonnell Douglas DC-9, Boeing 727, Boeing 707. In the 1980’s JAT purchased new generations of Boeing 737-300 and McDonnell Douglas DC-10. During the civil war in the 1990’s, JAT had to stop all its domestic flights and suffered international sanctions .Those were lifted in 2000, and JAT resumed regular flight services. To celebrate the move that coincided with the country restructuring from FR Yugoslavia to Serbia and Montenegro, JAT Yugoslav Airlines changed their name to Jat Airways on 8 August 2003. Ten years later, on 26 October 2013, JAT ceased operations; its fleet being the backbone of the new Air Serbia.