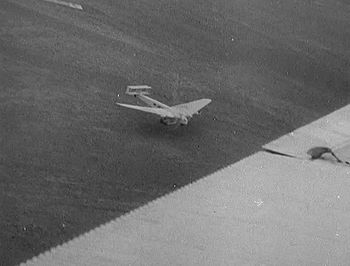 The Junkers G.38 was a large German four-engined transport aircraft which first flew in 1929. Two prototypes were constructed in Germany. Both aircraft flew as a commercial transport within Europe in the years leading up to World War II. During the 1930s, the design was licensed to Mitsubishi which constructed and flew a total of six aircraft, in a military bomber/transport configuration, designated Ki-20. The G.38 carried a crew of seven. On board mechanics were able to service the engines in flight due to the G.38's blended wing design which provided access to all four power plants. 2 aircrafts were produced and operated by the Lufthansa, and 6 built as bomber Ki-20 for Japanese Air Force.

This page lists all films that feature a variation of the Junkers G 38.