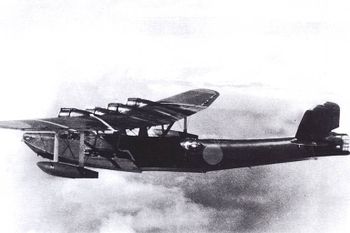 The Kawanishi H6K was an Imperial Japanese Navy flying boat produced by the Kawanishi Aircraft Company and used during World War II for maritime patrol duties. The Allied reporting name for the type was Mavis; the Navy designation was "Type 97 Large Flying Boat". H6Ks were deployed from 1938 onwards, first seeing service in the Sino-Japanese War and were in widespread use by the time the Pacific War full-scale erupted, in 1942. At that time of the war, four kokutai operated a total of 66 H6K4s. The type had some success over South East Asia and the South West Pacific. H6Ks had excellent endurance, being able to undertake 24-hour patrols, and was often used for long-range reconnaissance and bombing missions. From bases in the Dutch East Indies, they were able to undertake missions over a large portion of Australia. However, the H6K became vulnerable to a newer generation of heavier armed and faster fighters. It continued in service throughout the war, in areas where the risk of interception was low. In front-line service, it was replaced by the Kawanishi H8K.

This page lists all films that feature the Kawanishi H6K.