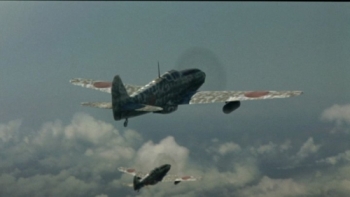 The Kawasaki Ki-61 Hien was a fighter aircraft used by the Imperial Japanese Army Air Force from 1941. As the single japanese fighter powered by a liquid-cooled inline V engine, the Kawasaki aircraft was first confused with some german or italian types. In fact, it was built around the Kawasaki Ha-40, a license copy of the Daimler-Benz DB 601A. Its self-sealing fuel tanks, upgraded armament, and good dive performance were a brand new philosophy among airmen who where lesser pleased by its high wing loading. But the Ki-61-II variant was one of only very few Japanese aircraft able to reach the operational altitude of the B-29s raiding Japan with decent firepower.
Its airframe was the basis of a latter model powered this time by a radial engine : the Kawasaki Ki-100.

This page lists all films that feature a variation of the Kawasaki Ki-61 Hien.