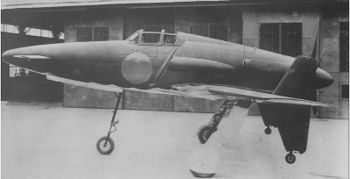 The Kyūshū J7W1 Shinden fighter was a World War II Japanese propeller-driven aircraft prototype that was built in a canard design. The wings were attached to the tail section and stabilizers were on the front. The propeller was also in the rear, in a pusher configuration. Developed by the Imperial Japanese Navy (IJN) as a short-range, land-based interceptor, the J7W was a response to B-29 Superfortress raids on the Japanese home islands. For interception missions, the J7W was to be armed with four forward-firing 30 mm cannons in the nose. The Shinden was expected to be a highly maneuverable interceptor, but only two prototypes were finished before the end of war. Plans were also drawn up for a gas turbine–powered version, but this never even reached the drawing board. Only two aircraft produced.

This page lists all films that feature the Kyūshū J7W1 Shinden.