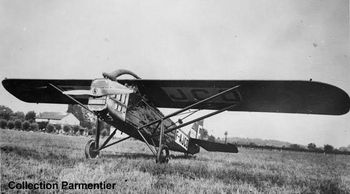 The Latécoère 26 was a French monoplane mail plane designed and built by Latécoère. Designed in the 1920s as a mail carrier it first flew in 1926, based on the earlier Latécoère 25 with a longer fuselage. It had a parasol wing with a fixed tailskid landing gear. The main landing gear was both robust and wide-track to enable the aircraft to land on unprepared surfaces. Powered by a single nose-mounted Renault 12Ja piston engine. Designed as a mail carrier it had room for only two passengers and an open cockpit for the pilot. 90 aircraft built mostly operated by the Compagnie Générale Aéropostale.

This page lists all films that feature the Latécoère 26.