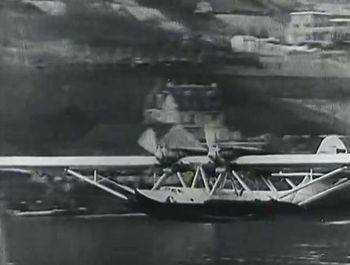 The Latécoère 300 series of aircraft were a group of civil and military flying boats. They were manufactured by French aircraft manufacturer Latécoère in the 1930s. Seven aicraft were built operated by Air France and the Aéronavale. With Air France, the aircraft was transporting mail across the Atlantic Ocean from Dakar, Senegal to Natal, Brazil. It completed 23 missions before being lost at sea on December 7, 1936. The pilot was the famous French aviator Jean Mermoz on F-AKGF Croix du sud.

This page lists all films that feature a variation of the Latécoère 300.