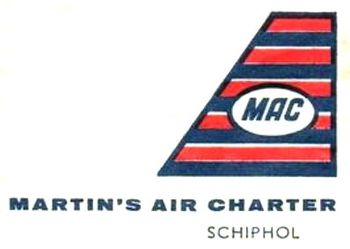 Martin's Air Charter (MAC) was founded on 24 May 1958 by Martin Schröder and John Block, with one aircraft, a de Havilland Dove, and five employees. In 1963 Mr. Schröder sold 49% of the company to four equal shipping company shareholders (12.25% each, these eventually combining as Nedlloyd). KLM would later purchase the 50+% that Mr. Schröder owned, buying him out.
The name was changed to Martinair Holland in 1966. A healthy boost came in 1967 with the opening of business to the United States.

This page contains all films, TV series, and video games that feature aircraft of Martinair.