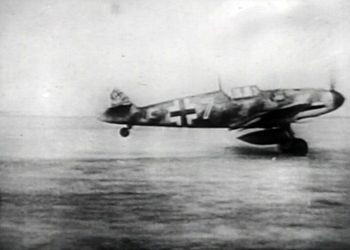 The Messerschmitt Bf 109 was a German World War II fighter aircraft originally conceived as an interceptor, but later models were developed to fulfill multiple tasks, serving as bomber escort, fighter bomber, day/night- all-weather fighter, bomber destroyer, ground-attack aircraft, and as reconnaissance aircraft. The 109 first saw operational service during the Spanish Civil War and was still in service at the dawn of the jet age at the end of World War II. It was supplied to and operated by several states during World War II, and served with several countries for many years after the war. The Bf 109 was the most produced warplane during World War II, and the most produced fighter aircraft in history, with almost 34000 units produced, including Hispano spannish built versions.

This page lists all films that feature a variation of the Messerschmitt Bf 109.