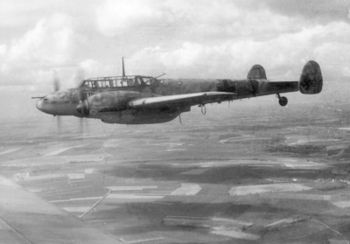 The Messerschmitt Bf 110 was a twin-engine heavy fighter in the service of the Luftwaffe during World War II and served with success in the early campaigns: the Polish, Norwegian and Battle of France. The Bf 110's lack of agility in the air was its primary weakness. This flaw was exposed during the Battle of Britain, when some Bf 110-equipped units were withdrawn from the battle after very heavy losses and redeployed as night fighters, a role to which the aircraft was well suited. The Bf 110 enjoyed a successful period following the Battle of Britain as an air superiority fighter and strike aircraft in other theatres. During the Balkans Campaign, North African Campaign and on the Eastern Front, it rendered valuable ground support to the German Army as a potent fighter-bomber. Later in the war, it was developed into a formidable night fighter, becoming the major night-fighting aircraft of the Luftwaffe.

This page lists all films that feature a variation of the Messerschmitt Bf 110.

The following 39 pages are in this category, out of 39 total.