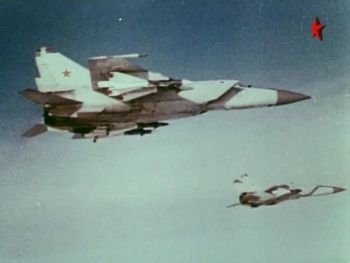 The Mikoyan-Gurevich MiG-25 is a supersonic interceptor and reconnaissance aircraft that was among the fastest military aircraft to enter service. Designed by the Soviet Union's Mikoyan-Gurevich bureau the first prototype flew in 1964 with entry into service in 1970. It has a top speed of Mach 2.83+ (as high as Mach 3.2, but at risk of significant damage to the engines), and features a powerful radar and four air-to-air missiles. Production of the MiG-25 series ended in 1984 after completion of 1,190 aircraft. A symbol of the Cold War, the MiG-25 flew with a number of Soviet allies and former Soviet republics, remaining in limited service in Russia and several other nations. It remains the fastest combat aircraft ever fielded.

This page lists all films that feature the Mikoyan-Gurevich MiG-25 .