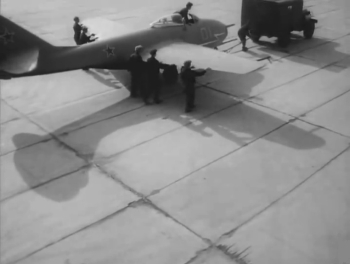 In February 1945, the Council of People's Commissars ordered the Mikoyan-Gurevich (MiG) OKB to develop a single-seat jet fighter to be equipped with two German BMW 003 engines placed side by side in the lower front fuselage. Intended as to destroy bombers, the aircraft was to be equipped with a single 57-millimeter (2.2 in) or 37-millimeter (1.5 in) gun, plus two 23-millimeter (0.9 in) guns. This led to the first turbojet fighter developed by Soviet Union. The straight wing and engines flamed out when firing the cannon due to gun gas ingestion made it quickly superseded by the next Mig-15. More half of them ended their career among the People's Liberation Army Air Force from 1950.

A total of 610 Mikoyan-Gurevich MiG-9 of all series have been built.

This page lists all films that feature a variation of the Mikoyan-Gurevich MiG-9.