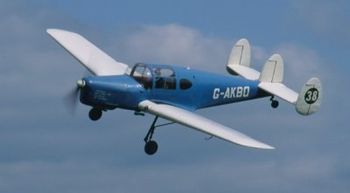 The Miles M.38 Messenger was a British four-seat liaison designed in the middle of the World War 2. Without official requirement, the type eventually was produced in a very short serie as a VIP aircraft and for some time after the war for some private owners. Its triple fins and rudders are required to keep control as slow as 25 mph and made it highly recognisable.

93 Miles M.38 Messenger were built of which 71 were for the civil customers.

This page lists all films that feature a variation of the Miles M.38 Messenger.