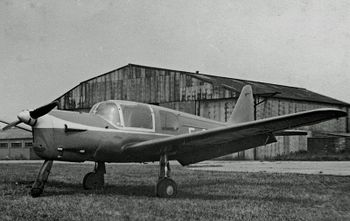 The Nord Aviation Norécrin was developed to meet a French ministry of transport sponsored design competition. The Norécrin is a low-wing cantilever monoplane with a retractable tri-cycle landing gear and the prototype (Nord 1200) was designed to receive a nose-mounted 100hp (75kW) Mathis G4R piston engine but flew only with a 140 hp Renault 4 Pei (first flight on December 15 1945 with Georges Detre as test pilot). The production version had three-seats and was designated the Nord 1201 Norécrin I. A number of variants were produced with different engines fitted. Later variants had four-seats and the Norécrin V was a two-seat military variant with machine-guns and rockets. It was a successful design and 378 aircraft were built.

This page lists all films that feature the Nord Aviation Norécrin.