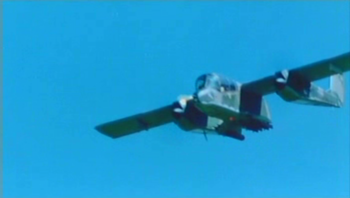 The North American Aviation-Rockwell OV-10 Bronco is a turboprop light attack and observation aircraft. It was developed in the 1960s as a special aircraft for counter insurgency (COIN) combat, and one of its primary missions was as a forward air control (FAC) aircraft. It can carry up to three tons of external munitions, and loiter for three or more hours. It was operated by US Army, German Luftwaffe and several South-American and East-Asian air forces.

This page lists all films that feature a variation of the North American-Rockwell OV-10 Bronco.