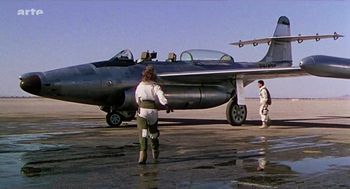 The Northrop F-89 Scorpion was an early American jet-powered fighter designed from the outset as an all-weather interceptor, the first jet-powered aircraft designed as such. Though its straight wings limited its performance, it was among the first United States Air Force (USAF) jet fighters with guided missiles, and notably the first combat aircraft armed with air-to-air nuclear weapons (the unguided Genie rocket).
The 1,050 Scorpion built were only manned by USAF and Air National Guard pilots between 1950 and 1969.

This page lists all works that feature a variation of the Northrop F-89 Scorpion.