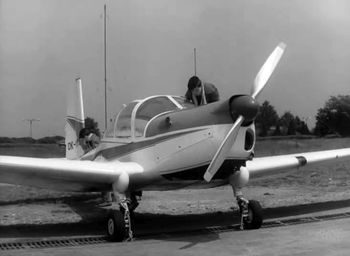 The Orličan L-40 Meta Sokol was a Czechoslovakian sports and touring four-seat single-engine low-wing aircraft of the late 1950s. Around one hundred of them were built. One of the point to easily identify this plane is to look the landing gear : the tail wheel is not at the usual place but nearly the airframe'scenter.