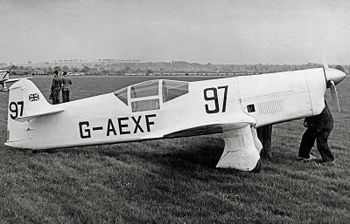 Percival Mew Gull during races in 1953.

The Percival Mew Gull was a British racing aircraft which flew for the first time in March 1934. Despite a engine of only 165 hp, the airframe was considered with highly potent and eventually set world record in its class once fitted with a 205 hp engine.

This page lists all films that feature a variation of the Percival Mew Gull.