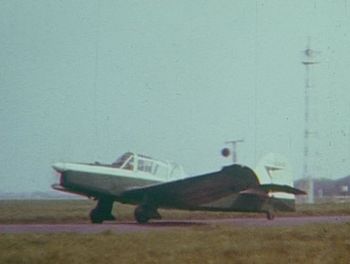 Percival Prentice seen in Independent Airlines – From the Fifties to the Eighties.

The Percival Prentice was a basic trainer of the Royal Air Force which was introduced in November 1947. It is a low-wing monoplane with a fixed tailwheel undercarriage. Front seating was in a side-by-side configuration with a rear seat provided. The type was replaced in less a decade, being withdrawn in favor of the de Havilland (Canada) Chipmunk or the Percival Provost. Nearly half of the production was then bought by a company for civilian conversion or direct sale but most were scrapped and only one tenth were actually registered in the civil registers.
A hundred was purchase by Fuerza Aérea Argentina (Argentine Air Force) in 1948. Other overseas customers were the Indian Air Force (20 Percival-built T.3s plus 42 built under licence by Hindustan Aircraft) and the Al Quwwat al-Jawwiya al-Lubnaniyya (Lebanese Air Force) which ordered three T.1s.

A grand total of 525 Percival Prentice were built.

This page lists all films that feature a variation of the Percival Prentice.