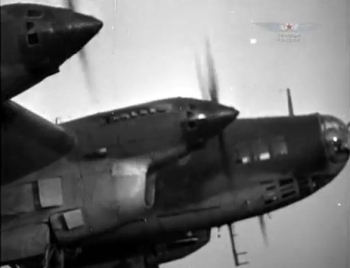 The Petlyakov Pe-8 was the single four engine Soviet bomber built during the World War 2. Its limited number and the lack of spare parts -which gave poor results in operations- let to try several upgrades, including new engines. Once its designer killed in a air accident in 1942, the ANT-7 bacame the Petlyakov Pe-8 in order to celebrate Vladimir Petlyakov. But its role was still without great effect and let to use it only on few dates after mid 1944. Neverless, the type met more success and celebrity after the war in the Polar Aviation and more over when it flew Foreign Minister Molotov from Moscow to the United States in 1942.

A total of 93 Petlyakov Pe-8 have been built.

This page lists all the films that feature a variation of the Petlyakov Pe-8.