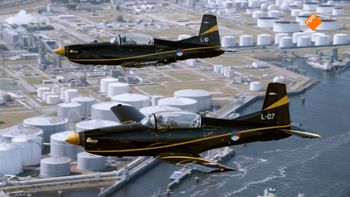 The Pilatus PC-7 Turbo Trainer is a low-wing tandem-seat training aircraft designed and manufactured by Pilatus Aircraft of Switzerland. The aircraft is capable of all basic training functions including aerobatics, instrument, tactical and night flying.

The PC-7 was developed from the preceding Pilatus P-3, largely differing by the adoption of a turboprop engine, a bubble canopy, and a new one-piece wing. Introduced during the 1970s, it has since developed a sizable presence of the global trainer market. The type has been adopted by in excess of 20 air forces as their ab initio trainer, as well as multiple civilian operators. Over one million hours have reportedly been flown by PC-7s worldwide. In addition to training operations, some aircraft are armed and have been used for combat missions by several customers, including Chad, Iran, and Mexico, often in violation of the relevant export agreement between the customer and the Swiss government.

An improved model of the aircraft, the PC-7 Mk II, was developed during the 1990s by combining the newer PC-9's airframe and avionics with the PC-7's smaller turbine engine. Reportedly, in excess of 500 PC-7s have been sold to various operators, the majority of which still being in service. In Pilatus' line-up, the PC-7 has been succeeded by the newer PC-9 and PC-21 trainers.

This page contains all films, TV series, and video games that feature the Pilatus PC-7.