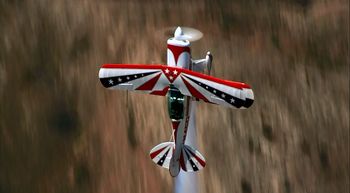 Pitts S-2B Special seen in One Six Right: The Romance of Flying.

The Pitts Special (company designations S1 and S2) is a series of light aerobatic biplane designed by Curtis Pitts [who has nothing to do with the Pitts Sky Car designed by John W Pitts]. It has accumulated many competition wins since its first flight in 1944. The Pitts biplanes dominated world aerobatic competition in the 1960s and 1970s and, even today, remains a potent competition aircraft in the lower categories. In 1962 Curtis Pitts set up Pitts Enterprises to sell plans of the S-1C to homebuilders. The rights for home-built versions of the Pitts were sold in 1994 to Steen Aero Lab, with the Afton factory and production rights being transferred to Aviat who still produce the model nowadays.

The Pitts Special is still in production 70 years after the first flight of the prototype.

This page lists all films that feature the Pitts Special.