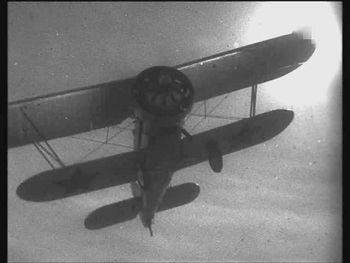 Polikarpov I-5 in Pobeda.

The Polikarpov I-5 was a single-seat biplane which became the primary Soviet fighter between its introduction in 1931 through 1936, after which it became the standard advanced trainer. Following Operation Barbarossa, which destroyed much of the Soviet Air Forces (VVS), surviving I-5s were equipped with four machine guns and bomb racks and pressed into service as light ground-attack aircraft and night bombers in 1941. They were retired in early 1942 as Soviet aircraft production began to recover and modern ground-attack aircraft like the Ilyushin Il-2 became available. 803 were built.

This pages lists all films, TV series, and video games that feature the Polikarpov I-5.

Pages in category "Polikarpov I-5"