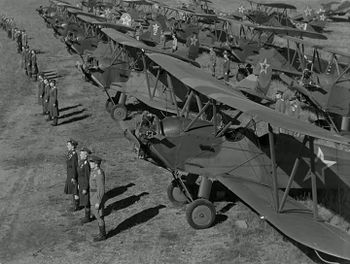 The Polikarpov U-2 (also Po-2 after 1944) served as a general-purpose Soviet biplane with open seats. The prototype of the U-2, powered by a 74 kW (99 hp) Shvetsov M-11 air-cooled five cylinder radial engine, first flew on 7 January 1928 piloted by M.M. Gromov. Aircraft from the pre-production series were tested at the end of 1928 and serial production started in 1929 in Factory Nr 23 in Leningrad. Production in the Soviet Union ended in 1953, but license-built CSS-13 were still produced in Poland until 1959. Used first as in trainer and transportation roles, it was developed in more twenty versions and after the WW2, others were still engineered, some by polish licenser. Their tasks extend from the first ones to agricultural aircraft, light bomber and night harassment, medevac, liaison, experiment, etc... Some where 'limousine' with a closed cabin and some short series where fitted with float. It was too used during the Korean war where its low performance, one more time, made it extremely difficult to counter during its nightly actions.

This page lists all films that feature a variation of the Polikarpov U-2 / Po-2.

Pages in category "Polikarpov U-2"