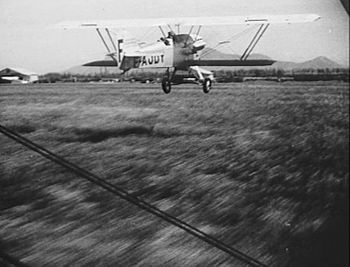 The Potez 25 was a French twin-seat, single-engine biplane which made its first flight probably in the befinning of 1925. A multi-purpose fighter-bomber, it was designed as a line aircraft and used in a variety of roles, including fighter and escort missions, tactical bombing and reconnaissance missions. In the late 1920s and early 1930s, Potez 25 was the standard multi-purpose aircraft of over 20 air forces and nearly a third was built under license by several countries. Despite used for secondary tasks at the breakout of World War 2, several airframes served until the end of war.
Several civilian companies used the Potez 25 among schools or for airmail. With some highlights like the crash of Guillaumet on 13 June 1930 in the Andes.
Most of the airframes were powered by the Lorraine 12 Eb of 450 hp but not less than 27 others engines could be used. This led sometimes to a uncommon shape (cowling, radiator, tail).

This page lists all films that feature the Potez 25.