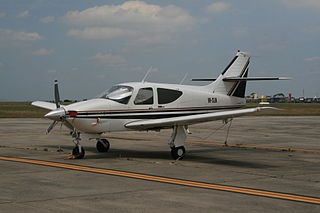 The Rockwell Commander is a series of four seat, low-wing monoplane aircraft built by North American Rockwell in the 1970s. If the two prototypes have a fixed landing gear, all the production airframes have a three wheel retractable landing gear. The type 112 was the first variant with several improvement throughout the production. Then came the 114 with a more powerfull engine. Production was stopped in 2002. A new variant (115) was scheduled in 2008 but never entered production due to economical reasons. The type made headlines when on spring 2002, a Commander 112A crashed into the Pirelli Tower in Milan (Italy).

Nearly 1 300 Rockwell Commander of all variants have been built.

This page lists all films that feature a variation of the Rockwell Commander.