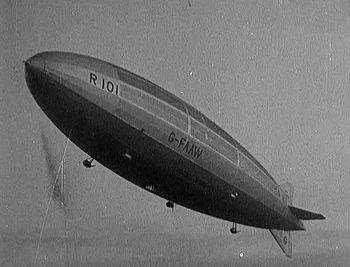 R101 was one of a pair of British rigid airship completed in 1929 as part of a British government programme to develop civil airships capable of service on long-distance routes within the British Empire. It was designed and built by the Royal Airship Works, an Air Ministry-appointed team, and was effectively in competition with the government-funded but privately-designed and built R100. When built it was the world's largest flying craft, and it was not surpassed until the Hindenburg flew five years later. After some trial flights, and subsequent modifications to increase lifting capacity which included lengthening the airship by 46 ft (14 m), it crashed on 5 October 1930 in France during its maiden overseas voyage, killing 48 of the 54 people on board. Among the passengers were Lord Thomson, the Air Minister who had initiated the programme, and other senior officials, including the airship's designers. The crash of R101 effectively ended British airship development. The loss of R101 was one of the worst airship accidents of the 1930s. The loss of life was greater than in the Hindenburg disaster of 1937 and was second only to that of the USS Akron crash in 1933.

This page lists all films that feature the Royal Airship Works R101.