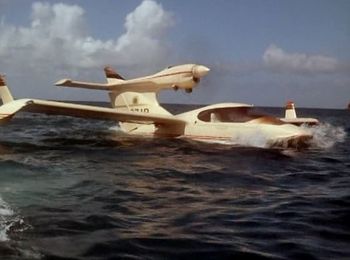 The Seawind is an amphibian aircraft designed by Seawind International in the beginning of the 1980's. This homebuilt four places airframe is powered by a single engine on the leading edge of the very large vertical fin. So the 3-blade propeller (sometimes a 4-blade is used) is pulling the aircraft at 169 mph (272 km/h) at cruise speed. This layout makes the Seawind easy to identify (the other amphibians of this class built by Lake Aircraft have a pusher propeller on a pylon).
The first design was the Seawind 2000 which flew for the first time in 1982. In 1994, the first Seawind 3000 took off with some changes in order to have better water handling and more power and from now a canopy which open at the back (instead the sideways-hinged on the Seawind 2000).
Usually fitted with a Lycomin flat piston engine, a handle of airframes have been modified with an Allison or a Pratt & Whitney turboprop. In order to gain certification and extend use, the Seawind 300C was developed but did face several hard times during testing and the 2008 financial crisis, those events delaying the process which is still under way.

Since 1982 about a hundred Seawind have been built or are still on the workbench.

This page lists all films that feature a variation of the Seawind International Seawind on IMPDB.