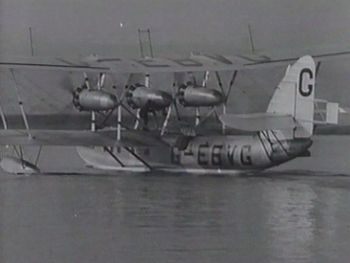 The Short Calcutta or S.8 was a civilian biplane airliner flying boat made by Short Brothers. It originated from an Imperial Airways requirement to service the Mediterranean legs of its services to and from India. Derived from the Short Singapore military flying boat, the Calcutta was noteworthy for being the first stressed skin, metal-hulled flying boat. It was equipped with three Bristol Jupiter engines mounted between the wings. The two pilots flew the plane from an open cockpit while the radio operator shared the main cabin with the 15 passengers. A total of seven aircraft were built. A military version of the Calcutta, originally known as the Calcutta (Service type), was built as the Short Rangoon. In 1934, a Calcutta was purchased by the French Breguet Company from which they developed a military version for the French Navy known as the Breguet S.8/2, it was similar to the Rangoon version. Four aircraft were built under licence by Breguet at Le Havre. Breguet later developed an improved version the Breguet 521 Bizerte.

This page lists all films that feature the Short S.8 Calcutta.