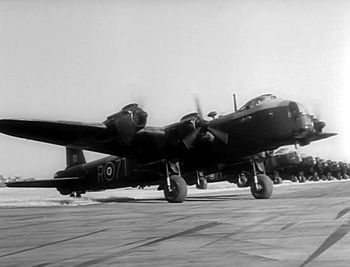 The Short Stirling was the first four-engined British heavy bomber of the Second World War. The Stirling was designed and built by Short Brothers to an Air Ministry specification from 1936, and entered service in 1941. The Stirling had a relatively brief operational career as a bomber, being relegated to second line duties from 1943 onwards when other four-engined RAF bombers, specifically the Handley Page Halifax and Avro Lancaster, took over its role. Almost 2400 aircrafts built.

This page lists all films that feature the Short S.29 Strirling .