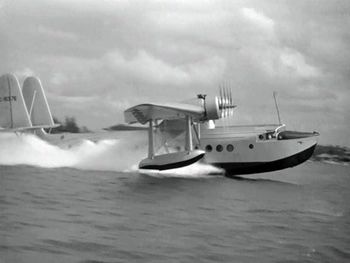 The Sikorsky S-42 was an 1930s commercial flying boat designed and built by Sikorsky Aircraft to meet a 1931 requirement from Pan American World Airways (Pan Am) for a long-range transatlantic flying boat. Based on the earlier Sikorsky S-40 that flew in 1931, Igor Sikorsky and Charles Lindbergh (who was working at the time as a consultant to Pan American Airways) laid out plans for a new, larger flying boat. During the S-40's inaugural flight on November 19, 1931, the two visionaries began preliminary sketches on the back of a menu in the S-40's lounge. Flying for Pan American Airways, a total of 10 S-42s were built, manufactured by the Vought-Sikorsky Aircraft Division of the United Aircraft Corporation in Stratford, Connecticut. The prototype first flew on March 30, 1934.The S-42 only served with Pan American Airways. It was used on many routes, including the San Francisco - Hawaii, New York - Bermuda, and Hong Kong -China. The S-42 named the Pan Am Clipper was used to survey the route from the US West Coast to China, making the first survey flight from Los Angeles, California to Pearl Harbour, Hawaii in April 1935.The S-42 was also known as the Flying Clipper and the Pan Am Clipper.

This page lists all films that feature the Sikorsky S-42.