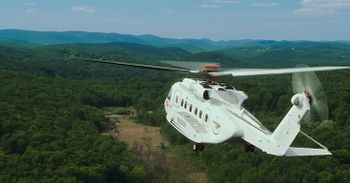 The Sikorsky S-92 is a four-bladed twin-engine medium-lift helicopter built by Sikorsky Aircraft for the civil and military helicopter market. The S-92 was developed from the Sikorsky S-70 helicopter and has similar parts such as flight control and rotor systems. The H-92 Superhawk is a military version of the S-92 in the utility transport role, capable of carrying 22 troops. The H-92 can also be configured for specific missions, including Search and Rescue and executive transportation. The CH-148 Cyclone is a shipboard maritime helicopter variant currently under development for the Canadian Forces. From February 2009, the S-92 program was placed under Sikorsky Global Helicopters, Sikorsky's new civil helicopter business unit.

This page lists all films that feature the Sikorsky S-92.