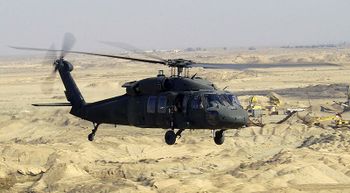 The Sikorsky UH-60 is a family of twin engined, medium-heavy lift military helicopters developed in the 1970s. With over 1,500 in operation with all services, including 1,200 with the U.S. Army, the UH-60 is the most widely used aircraft in the U.S. Military. Civilian, non-military and export models are designated the S-70.

This page lists all the films which feature a variation of the Sikorsky UH-60. For the civilian variant, see Sikorsky S-70.