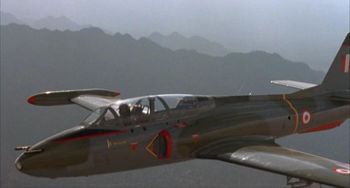 The Soko G-2 Galeb is an Yugoslavian jet trainer, single-engine, low-wing aircraft with some capacities in the light attack role. The crew is seated in a tandem cockpit layout. Designed as a collaborative effort between Yugoslavia and the United Kingdom to replace the Lockheed T-33, the airframe is powered by a license-built Armstrong Siddeley (now Rolls-Royce) Viper turbojet. The two main customers are the Yugoslavia and Libya and so the type was used during conflicts (Balkan War following Yugoslavia split during the 1990's and the 2011 Libyan civil war) as the aircraft has some weaponery for advance piloting stages. A handfull aircraft was sold in Africa (Zaïre and Zambia) and Singapore bought one. A dozen were sold on the civil market once decommissioned and are part of some airshow or seen in movies. On the military side, most countries born of the 1992 Yugoslavia split used the Galeb but very few are still on strength today (2020).

This page lists all films that feature a variation of the Soko G-2 Galeb.