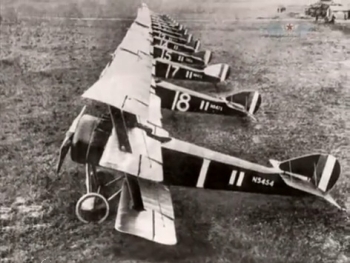 The Sopwith Triplane was a British single-seat fighter aircraft easily identifiable due to its triplane configuration. Its first flight occured on 28 May 1916 and its good handling impressed the German despite their few number. Ampered by bad accessibility to some main parts then lack of spare parts, its combat career was brief, with a climax during summer of 1917.

Only 147 Sopwith Triplane have been built.

This page lists all the films that feature a variation of the Sopwith Triplane.