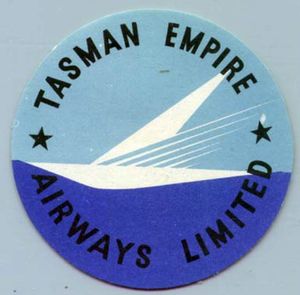 Tasman Empire Airways Limited-TEAL was the forerunner of Air New Zealand. It was first registered in Wellington as a limited liability company on 26 April 1940. The shares were originally held by the New Zealand government (20%), Union Airways (19%), BOAC (38%) and Qantas (23%).In April 1961 the Australian government decided to subsidise the wholly Australian-owned Qantas airline and the New Zealand government bought out the Australian government's shareholding, giving New Zealand 100% ownership. The airline changed to Air New Zealand (its present name) on 1 April 1965 at the same time as Douglas DC-8 entered service. TEAL's TE flight code carried over to Air New Zealand, which continued to use it for its international routes until 1989. Then its international flights began using the NZ code that belonged to NAC and had been used for that carrier's domestic flights.