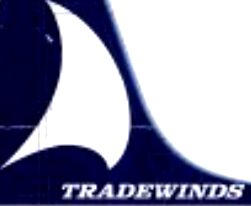 Tradewinds Airways Ltd was founded in November 1968 after the collapse of Transglobe Airways and flew charter flights from its base at London Gatwick (LGW) airport, using Canadair CL-44 aircraft previously operated by Transglobe.
Tradewinds flew a lot of relief flights to Nigeria during the civil war with Biafra and that allowed the company to expand in Africa, the Middle East and the Far East. Tradewinds also flew numerous flights for the UK Ministry of Defence. These military flights included the transport of missiles to the NATO arctic test ranges. Tradewinds also held the exclusive contract for the movement of Formula One racing cars.
The company was taken over in 1977 by the Lonrho Group and began to replace the Canadair CL-44 's with used Boeing 707-320C freighters. With those aircraft, flights to Chicago and Toronto were begun.
During the early 80's, the Lonrho Group ran into financial trouble and was forced to sell Tradewinds' to Homac Aviation. Lack of capital did not allow the 707 aircraft to be replaced when they became subject to new noise regulations and the airline ceased operations on September 1990.


This page lists all films, TV series, and video games that feature aircraft of Tradewinds Airways.