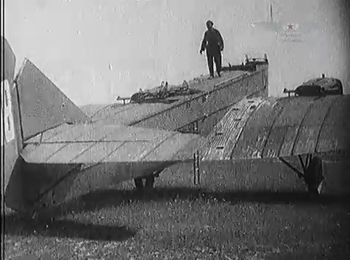 The Tupolev ANT-4 (named TB-1 by the VVS) was a Soviet heavy twin engine bomber aircraft, the first large all-metal aircraft built in the Soviet Union. After a first flight on 26 November 1925, a long delay started due to lack of aluminium and the search of another type of engine. Production rose in 1929 and the type was pressed into service. It was used for several record and propaganda flights. It was also widely used for experimental purposes, being the first mothership (Zveno project). A limited use as bomber occured in 1941, the type being outclassed. Several dozens were converted for civil cargo tasks. One of these converted airframe flew until 1948.

216 Tupolev ANT-4 of all variants were built.

This page lists all films that feature a variation of the Tupolev ANT-4 / TB-1.