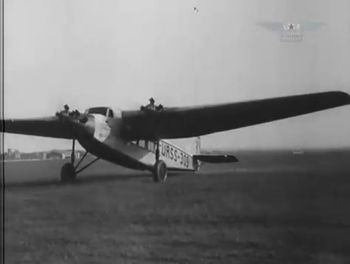 The Tupolev ANT-9 was a Soviet transport aircraft designed at the end of the 1920's and which made its first flight on May 1931. Intended for nine passengers, a hundred of this high-wing monoplane was built in several layouts : first airframes were powered by three radials of different manufacturers (Mikulin, Wright or Gnome-Rhône) or two V-12 liquid-cooled piston engines (this gave the Tupolev PS-9 variant). The aircraft performed well for over a decade, being pressed into the Air Force in 1941 as transport or staff aircraft but as an ambulance too. After 1943, their number decreased but the very last ones soldiered on until 1945. In the beginning of its career, the aircraft performed several flights highly publicised or for propaganda goals. One PS-9 was even disguised in a Krokodil's shape for use by the Propaganda Squadron, shadowing the satirical magazine of this name.

This page lists all films that feature the Tupolev ANT-9 / PS-9.