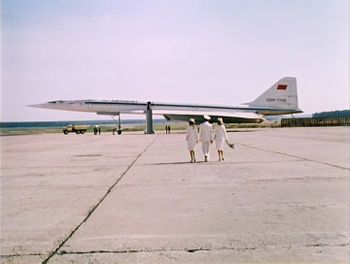 The Tupolev Tu-144 (NATO name: "Charger'") was the world's first supersonic transport aircraft (SST) and remains one of only two SSTs to enter commercial service, the other being Concorde. The design, publicly unveiled in January 1962, was constructed under the direction of the Soviet Tupolev design bureau, headed by Alexei Tupolev. The prototype first flew on 31 December 1968 near Moscow, two months before the first flight of the Concorde. The Tu-144 first broke the sound barrier on 5 June 1969, and on 15 July 1969 became the first commercial transport to exceed Mach 2. A Tu-144 crashed in 1973 at the Paris Air Show, delaying its further development. The aircraft was introduced into passenger service on 1 November 1977, almost two years after the Concorde. In May 1978, another Tu-144 (an improved version, named Tu-144D) crashed in a test flight while being delivered, and the passenger fleet was permanently grounded after only 55 scheduled flights. The aircraft remained in use as a cargo plane until 1983, by which point a total of 102 commercial flights had been completed. The Tu-144 was later used by the Soviet space programme to train pilots of the Buran spacecraft, and by NASA for supersonic research.

This page lists all films that feature the Tupolev Tu-144.