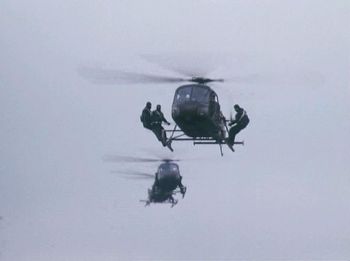 The Westland Scout was a general purpose military light helicopter developed by Westland Helicopters. It was closely related to the Westland Wasp naval helicopter. Both the Scout and the Wasp were developed from the Saunders-Roe P.531, itself a development of the Saunders-Roe Skeeter. With the acquisition of Saunders Roe, Westland took over the P.531 project, which became the prototype for the Scout (originally called Sprite) and the Wasp. 150 Aircraft built and operated by several forces.

This page lists all films that feature the Westland Scout.